***Thank you for your participation and hope you enjoyed the Auction!  Our next Auction coming soon!***

× Bidding has ended on this item.
Ended

The Invisible Rope by Pavel

Quality made from Pavel from years ago 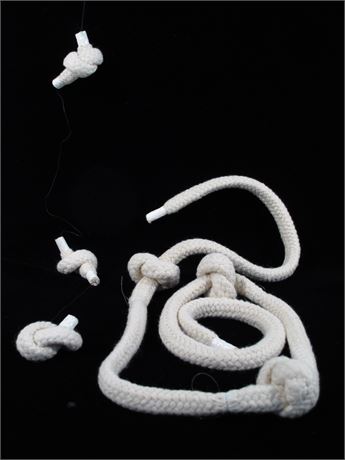 Payment Instructions
Please do not pay until you receive an email with shipping cost. Within 24-48 hours you will receive an email notification that your invoice/shipping details are ready.
Details
Description

The performer shows two plastic cups (not supplied).  He pulls an imaginary length of rope from one cup and, after having displayed it as a regular rope, he rolls it around his hand and places the invisible bundler back inside the cup.

A real length of rope is then pulled out of the second cup.  The rope is knotted in three places and put back in the cup.  A magic pass is made and the invisible rope is taken from the cup and three real knots are seen to be tied in it.  When the real rope is removed, it is free from knots.  Instead of them, three vacant places have appeared in the rope!  Quality made from Pavel from years ago.  Includes illustrated instructions.