***Thank you for your participation and hope you enjoyed the Auction!  Our next Auction coming soon!***

× Bidding has ended on this item.
Ended 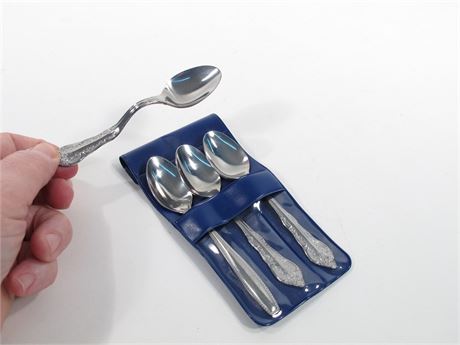 Payment Instructions
Please do not pay until you receive an email with shipping cost. Within 24-48 hours you will receive an email notification that your invoice/shipping details are ready.
Details
Description

An elaborate set of specially made spoons which will enable the following two routines and more limited only by imagination.  In the first routine a spectator is shown two spoons and given choice of one.  By lightly rubbing the neck of the chosen spoon, the magician causes the spoon to bend in a mysterious fashion after which both spoons may then be examined!  In the second routine three spoons are shown in a clear case and two spoons are removed and a spectator is given a choice of one with the magician taking the other.  With no effort at all the magician's spoon bends to a 90 degree angle and falls apart on to the table!  This spoon may then be examined.  The third spoon is removed from the case and is held by the magician very loosely.  By concentrating on it, it becomes bent in a wavy fashion and it to may then examined!  The routining is from Hiroshi Sawa, quite well known for baffling close up.  Made many years ago and includes three pages of illustrated instructions.